Researchers from Curtin University in Western Australia have uncovered an ancient reef structure on the Nullarbor Plain, a large, barren expanse in the desert of southwestern Australia. 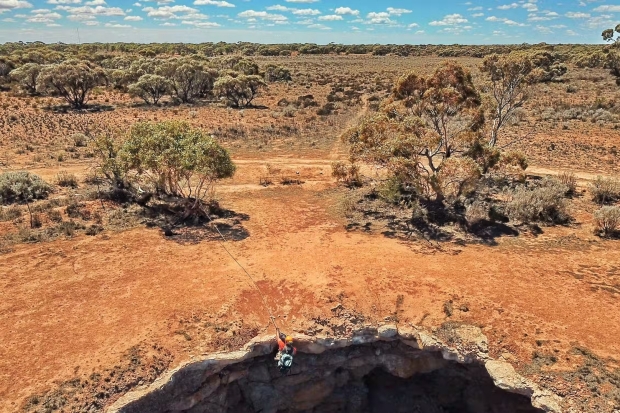 The Nullarbor Plain is the world’s largest single exposure of limestone bedrock, spanning about 200,000 square kilometers (77,220 square miles), and emerged from the ocean roughly 14 million years ago. According to the researchers, because large swathes of the area have been relatively unaffected by weathering and erosion processes for millions of years, partly due to the area’s dryness, the region’s ancient history is well preserved.

“Through high-resolution satellite imagery and fieldwork we have identified the clear remnant of an original sea-bed structure preserved for millions of years, which is the first of this kind of landform discovered on the Nullarbor Plain. The ring-shaped ‘hill’ cannot be explained by extra-terrestrial impact or any known deformation processes but preserves original microbial textures and features typically found in the modern Great Barrier Reef,” said Dr. Milo Barham from Curtin University.

Part of the ancient reef is highlighted in the above imagery, taking the shape of a “bullseye” structure spanning more than a kilometer wide and only a few meters high, with a dome in the center of a ring-shaped hill. The German Aerospace Centre provided the researchers with landscape data from its TanDEM-X Digital Elevation Model, which revealed the structure. Analyzing the rock from the area revealed evidence of tiny microbes that held the sediment together, suggesting the structure is part of an ancient reef, slowly degrading after having left the ocean.

“At the surface, due to the relatively stable conditions, the Nullarbor Plain has preserved large quantities of meteorites, allowing us to peer back through time to the origins of our solar system. These features, in conjunction with the millions of years old landscape feature we have now identified, effectively make the Nullarbor Plain a land that time forgot and allow a fascinating deeper understanding of Earth’s history,” said Dr. Barham.

For more information on this story, check out this article by Dr. Barham.