NVIDIA’s new GeForce RTX 4090 “Ada Lovelace” graphics card is nearly here, and now we’re finding out that a couple of the top-end Ada GPUs will be split into two variants.

The first of them will be the new GeForce RTX 4090 graphics cards which will arrive in two forms: 450W default TGP and 600W+ OC mode for custom RTX 4090 variants from AIB partners. Moore’s Law is Dead has pushed out a new video updating his audience with the latest from his sources.

The first source told him that the GeForce RTX 4090 will launch in the “first half of October” while the GeForce RTX 4080 launches in the “first half of November (as of now)”. His source does state what I was reporting on earlier today: that NVIDIA will launch the RTX 4090 first (October) then the RTX 4080 16GB and RTX 4080 12GB in November, followed by the RTX 4060 series GPUs in January at CES 2023.

NVIDIA’s mid-range GeForce RTX 4070 — not to be mistaken for the RTX 4080 12GB that will be launching after the RTX 4090 — doesn’t make sense in this market, and adds the first source of MLID. This source said that there’s still an entire year’s worth of Ampere stock (GeForce RTX 30 series graphics cards) and “millions” of ETH cards that are “about to hit eBay”.

One of the RTX 4090 BIOSes will allow for 450W, while the other is for the monster 660W OC mode. The third source of MLID said that the 450W BIOS on the RTX 4090 is “so they can promise existing PSUs can run it”. Noting that power while on the “High-power” BIOS is “seriously going to wreak havoc on a lot of systems”. 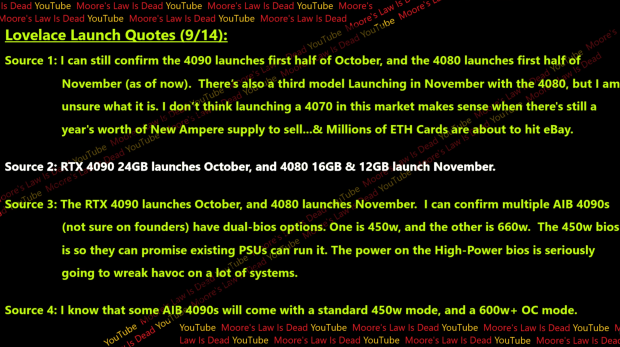 Yeah, the millions of second-hand mining cards hitting the market is going to cause a bigger issue than Intel eventually launching its new Arc desktop GPUs.