It has been almost two years since Motorola released a foldable Razr phone, and flip phone fans in most of the world will have to wait a bit longer. Moto has finally unveiled the 2022 Razr foldable, but it has only been announced for China, where it will retail for just 5,999 CNY, or about $900 USD—that’s several hundred less than the last version. Not only does the phone get a sizeable price drop, but it’s also more powerful than past Razr foldables with the latest Snapdragon 8+ Gen 1 chip and a 144Hz display.

The first thing you’ll notice about the new Razr is that it’s wide—very wide. It’s about 80mm across, which is even wider than the enormous Galaxy S22 Ultra. The 2.7-inch external display has not grown to take advantage of the larger footprint, though. There’s just more bezel around it.

Moto moved beyond the iconic Razr aesthetic with this phone. The large “chin” at the bottom is gone, leaving a device that closer resembles Samsung’s Galaxy Z Flip4. This is a more modern look, though, and it’ll make navigation gestures easier to use. When open, the Razr 2022 has a 6.7-inch foldable OLED with minimal creasing thanks to Moto’s custom hinge design, and it’s the first foldable display to ship with a 144Hz refresh rate. Motorola also ditched the oversized display notch from past versions of the device.

There’s a 50MP camera on the back, along with a 13MP ultrawide. The cameras are next to the display on the “top” of the flip, allowing you to take selfies using the external display as a viewfinder. There’s still a 32MP selfie camera you can use when the phone is open, but it won’t perform as well. 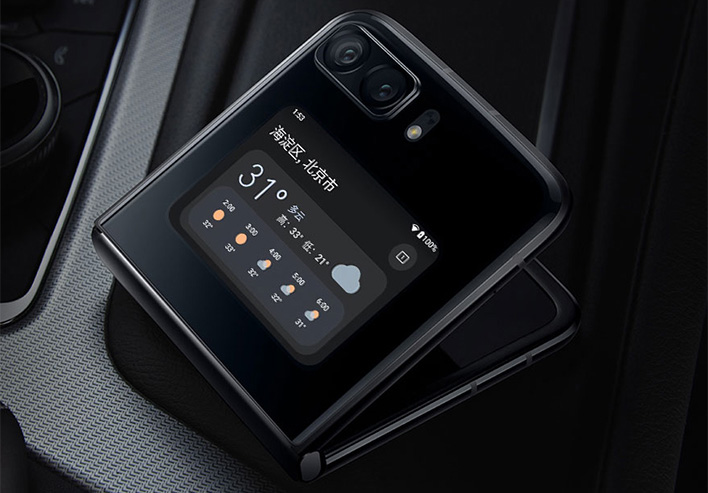 Previous foldable Razrs ran on 700-series Snapdragon chips, but the 2022 variant doesn’t skimp on power. It has the latest Snapdragon 8+ Gen 1 with 8 or 12GB of RAM. The 12GB model comes with a price bump to 7,299 CNY (about $1,085). However, the battery capacity is just 3,300mAh no matter how much you pay, and current Snapdragon flagship chips are rather power-hungry. A more competitive charging speed might have helped, but the 2022 Razr tops out at 33W.

Motorola is an iconic American company, but it’s owned by Lenovo these days. Several foldable phone manufacturers focus entirely on China, and that is Lenovo’s home market. So, it’s not a shock to see availability limited in this way. The 2022 Razr will ship in China on August 15th, and there’s no word on a US launch. It’s unlikely the new Razr will arrive stateside without at least one carrier partner, and none of the big three have stepped forward to announce such a deal.